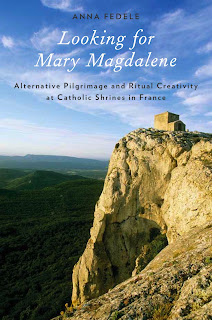 Anna Fedele offers a comprehensive ethnography of alternative pilgrimages to French Catholic shrines dedicated to Saint Mary Magdalene. Drawing on more than three years of extensive fieldwork, she describes how pilgrims from Italy, Spain, Britain, and the United States interpret Catholic figures, symbols, and sites according to spiritual theories and practices derived from the transnational Neopagan movement.

Fedele pays particular attention to the life stories of the pilgrims, the crafted rituals they perform, and the spiritual-esoteric literature they draw upon. She examines how they devise their rituals; why this kind of spirituality is increasingly prevalent in the West; and the influence of anthropological literature on the pilgrims. Among these pilgrims, spirituality is lived and negotiated in interaction with each other and with textual sources: Jungian psychology, Goddess mythology, and ''indigenous'' traditions merge into a corpus of theories and practices centered upon the worship of divinities such as the Goddess, Mother Earth, and the sacralization of the reproductive cycle.

The pilgrims' rituals present a critique of the Roman Catholic Church and the medical establishment and have critical implications for contemporary discourses on gender. Looking for Mary Magdalene is an invaluable resource for anyone interested in ritual and pilgrimage.

Posted by Anna Fedele at 4:50 AM No comments:

Article in "Culture and Religion"

Learning to Honour Their Body and Blood: Pilgrims on the Path of Mary Magdalene.

This article describes the beliefs and some of the ritual practices of a group of female pilgrims visiting places in France and Catalonia that they associate with the figure of Mary Magdalene. It pays particular attention to the pilgrim’s process of learning ways to relate to her own body and to her menstrual cycle. Drawing elements from neo-paganism these women reinterpret the meaning of Christian symbols and places. They consider Mary Magdalene both as a forerunner of feminism and as a model for independent women. Performing a ritual of offering menstrual blood to the earth, they establish an intimate relationship with what they identify as the “Mother Earth”. Theories used to justify the beliefs in the sacrality of menstrual blood are largely derived from anthropological texts.

You can write to: Anna Fedele, anna.fedele@live.com
Posted by Anna Fedele at 7:53 AM No comments: